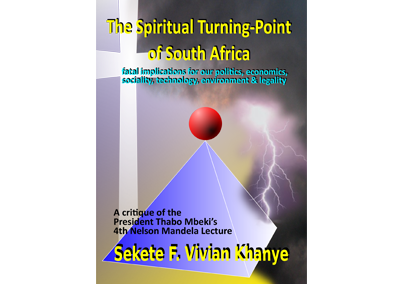 The Spiritual Turning-Point of South Africa

President Thambo Mbeki gave an intriguing lecture at the University of the Witwatersrand on the 29th July 2006. It was unusual. It was and still the loudest spiritual out-cry I have ever heard from the driving seat of this country. It struggles with the spiritual forces of doom and gloom it foresees in the oncoming, it attempts to sound an admonition to the naïve and it is attempting to reach and grip the ethereal for escape and relief.

This book sets out to amplify and level a prophetic engagement with the statements made by the president. Also, it will enlighten the reader as to what the subtle agenda of the leaders of South Africa is currently. This book is not about President Mbeki per se neither is it about his government. It is about the spiritual turning-point that occurred and manifested in the country during his term as President.

This turning-point has set new orientations and scenes for the country. The new is not always better, it could be worse and the latter seems to be the case for South Africa beyond the Mbeki era.